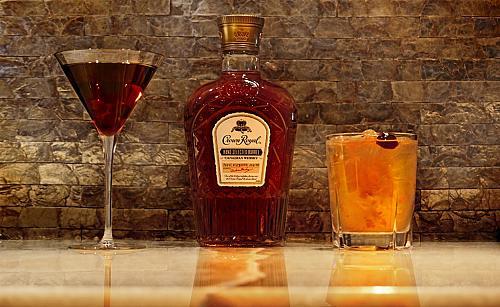 While the Queen of England herself might not have technically knighted these majestically inspired drinks, we humbly think she would heartily approve of them. And not just because the royal crown… ahum, Crown Royal… Peppermill’s EXCLUSIVELY bottled and hand selected barrel Crown Royal is the main ingredient in making these dynamite concoctions.

If you didn’t know, Crown Royal is a Canadian whiskey (holding back on the national anthem playing in my head, ‘Oh Canada, my home and native… OK, yep, moving on.) And if there were three things Canada excels at, other than maple syrup, and perhaps those adorable Canadian accents, it is whisky.

As for Peppermill’s EXCLUSIVELY bottled and hand selected barrel Crown Royal – it has been distilled in Crown Royal’s unique Coffey Rye Whisky Still, the only known one of its kind in North America. The whiskey is then aged in barrels that contract and expand with the changes in temperature, slowly developing character… and a bit of personality too, because that is important.

“Of the 50 finest whiskies that go into the award-winning Crown Royal Deluxe blend, the Coffey Rye is unmistakably the heart of it. Flavorful creamy notes combined with rich oak undertones, from maturing in new American oak barrels, give the whisky its exceptional smoothness.” Jonathan Johnson – Peppermill’s Beverage Manager.

As for our new and ‘EXCLUSIVELY bottled and hand selected barrel Crown Royal’ inspired and mixology made drinks:

Peppermill Manhattan $12
Made with Peppermill Crown Royal, Vermouth, bitters and poured into a chilled martini glass