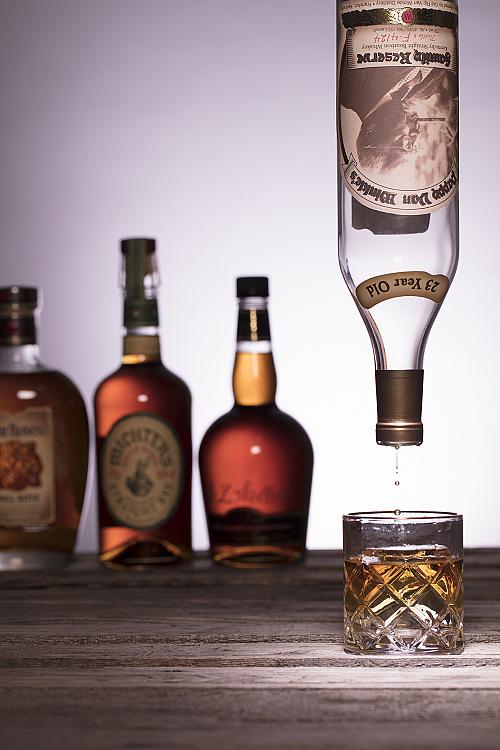 “Too much of anything is bad, but too much good whiskey is barely enough.” – Mark Twain

Spotting a trend in the bar and spirits world and encouraged by Peppermill Reno ownership, Terrace Lounge began compiling a whiskey collection attractive not just to experts and collectors but also to guests experiencing the spirit for the first time.

The expansive Neat Whiskey list at Terrace Lounge fluctuates between 285 and 300 bourbon, scotch, and whisk(e)y labels, including several rare vintages only found from auction houses and private collectors. Known as collecting dusties, Peppermill Reno has sought out legendary bottles like the Pappy Van Winkle line, Buffalo Trace Antique Collection, and the very rare AH Hirsh 16 year, among others, to make them accessible to all of our guests.

To those just starting off exploring the whisk(e)y world, Terrace Lounge’s spirit list was built with the intent of making guests with all levels of whiskey knowledge feel welcome, not intimidated. The list hopes to inspire questions, introduce new sips, encourage experimentation, and, most of all, enjoy whiskey! Guests will often hear Terrace Lounge staff start with one sentence: “Tell me what you like.” The patron’s answer could lead to the caramel notes of a bourbon or to the smoke and peat of Highland Scotch.

“Always carry a flagon of whiskey in case of snakebite, and furthermore, always carry a small snake.” – W.C. Fields

What is the difference between bourbon and rye? Irish, Scotch, and Canadian whisk(e)ys? Besides the spelling of whisk(e)y – generally, if there is an “e” in the country of origin, there is an “e” in whiskey – all are variations on a common theme: Mix milled grain and water, allow yeast to convert the grain sugars to alcohol, distill the whole thing, and let it sit in wood barrels for a spell. The nuances between each style reveal themselves in mash bills (recipes) and in particular with scotch and bourbon government regulations.

Scotch must be made and distilled in Scotland. The grain recipe, or mash bill, consists mostly of malted barley and is aged in oak barrels for three or more years. A single malt scotch is made from a single malt, while blended scotch is created from a variety of single malts to create a balanced flavor. Japanese whisky is very similar to scotch, with process precision and flavor profiles closer to scotch than American or Irish whiskey.

Bourbon must have a mash bill consisting of a minimum 51 percent corn, distilled to no more than 160 proof, enter new oak-charred barrels at no more than 125 proof, and bottled at no less than 80 proof. Although bourbon can be made anywhere in the United States, more than 90 percent is produced in Kentucky. Rye whiskey, increasingly popular in the U.S., replaces corn with rye in the mash bill, producing a spicier product. The desirable wheated bourbons such as Pappy Van Winkle and W.L. Weller? Wheat is high on the mash bill, the secondary grain after corn, producing a velvety smooth bourbon.

“This whiskey tastes like I’m about to tell you how I feel.” – Unknown

The Kentucky Chew was conceived by the late master distiller and bourbon rock star Booker Noe. His method was a way to properly taste – or “chew” – the bourbon so that each part of your mouth would experience the pour. When tasting whiskey, Booker held to a specific pattern to follow: Hold the whiskey up to the light and observe the color and legs (the trails of whiskey left on the glass post-swirl). Then, place the nose into the glass with lips parted and breathe through the mouth to smell the whiskey without burning the nose with alcohol vapors. Next, sip the whiskey, swishing it all around the mouth and then smacking the lips together after swallowing. Different parts of the tongue pick up different flavors and sensations –sweetness on the tip, saltiness on the sides, sour in the middle. The Kentucky Chew catches all the complex flavors of the whiskey by ensuring it coats the entire mouth. A nice, long finish, mirroring what was originally tasted, means it is worthy of another pour!

Whisk(e)y, bourbon and scotch were created to be savored and enjoyed. Many guests at Terrace Lounge have remarked on a particular dram or sip reminding them of a certain event, time, or place. Michter’s American Whiskey? A back porch on a late summer afternoon. Bruichladdich Classic Laddie Single Malt? A warm fire on a rainy day. There is sometimes debate on how best to serve or drink whiskey, but most master distillers would say there is no right or wrong way. When asked on the subject, legendary master distiller Jimmy Russell replied, “Well, good bourbon, you just drink it out of anything — even the bottle [laughs]. I like mine neat or on the rocks. In hot weather I like it chilled a little bit. But you drink it anyway you like it. If you like to mix it, that’s fine with me.”

Terrace Lounge staff is here to help lead guests on a fun and satisfying whiskey journey, whether it be a glass of whiskey neat or over a slow-melting ice rock, or maybe just a few drops of water. Try a classic Old Fashioned, Whiskey Sour or one of several seasonal cocktails. The staff has recommendations for every flavor profile, from guests diving in for the first time to collectors knocking drams from a personal bucket list.

Ready to get started? Guests will find the Neat Whiskey List at Terrace Lounge in the Tuscany Tower, open from noon each day and offering live music each night. Time to discover a new favorite and explore the world of whisk(e)y!
Suggested Reading: