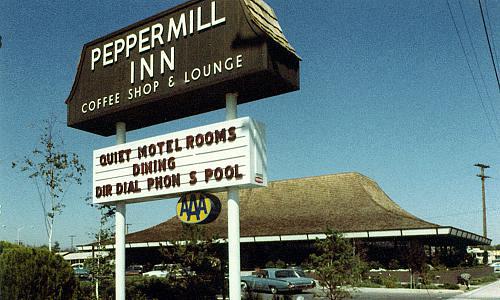 It’s our birthday month, and we’re celebrating 45 years all during the month of June! In honor of our blockbuster birthday, we’ve put together 45 Peppermill fun facts to celebrate.

2) Owners Bill Paganetti and Nat Carasali share an office to this day.

3) The Peppermill expanded from an upscale café to include a Motor Lodge in 1980.

4) Since 1980, The Peppermill has expanded their resort to feature 57 different room types.

5) Currently, The Peppermill has ten award winning restaurants and cafes on property.

6) In the last 15 years, The Peppermill has expanded its restaurants by 50%.

7) In addition to a nightclub, The Peppermill features 15 bars and lounges on property including the iconic Fireside Lounge.

8) The Peppermill’s Spa & Salon Toscana is one of the largest spas in Reno. It covers 33,000 square feet and three-stories of relaxing bliss.

10) Since 2010, The Peppermill has heated its property with on-site geothermal energy.

11) The Peppermill is the only hotel in the United States where heating is provided solely by on property geothermal energy. This provides 100 percent of mechanical and domestic heat from 4,000 feet below the earth’s surface.

14) In 2014, The Peppermill installed energy-recovery ventilators that improve internal air quality throughout the property making the air you breathe inside the resort actually cleaner than outside.

15) This year, The American Lung Association honored the Paganetti family and The Peppermill for their green initiatives.

18) The Peppermill has two towers designated to the non-smoking community.

19) In 2015, The Peppermill had 990,374 registered guests come through the hotel. That’s enough people to fill the Hawaiian Islands of Hawaii, Maui, Molokai, Kauai, Lanai, and more than half of Oahu!

20) The Peppermill is surrounded by several beautiful lakes and rivers, the most notorious being the Truckee River and Lake Tahoe.

21) In 2011, The Peppermill cut its water use by nearly 4.7 million gallons a year through the replacement of grass with artificial turf.

23) The Peppermill has 4,400 Italian, hand-painted canvases in the Tuscany Tower alone.

27) The Terrace Lounge and Biscotti’s bar offer brews from local favorites like The Depot, St. James Brasserie and Brewers Cabinet.

28) Spa Toscana offers many great spa options including a wellness ritual that traces its roots to Ayurveda, a 5,000-year-old natural healing system from the Vedic culture of India.

30) Peppermill’s Bimini Steakhouse offers over 1,000 wines from all over the world.

31) The Peppermill has been the recipient of the AAA Four-Diamond Award for five consecutive years.

32) The Peppermill’s first meeting space in 1980 was called Gold, Silver and VIP room. The total square footage was about 1,200 square feet. The maximum sit down dinner accommodated 80 people.

33) The Peppermill has hosted many famous faces through the years, most recently, Al Pacino, Easton Corbin, and Stone Temple Pilots!

34) The Peppermill has been featured on Box Office hits like The Wizard and Kingpin.

35) The Peppermill is the official host property for Mrs. US Universal.

36) Peppermill’s Terrace Lounge is one of the only lounges in Reno that doesn’t charge an entrance fee of any kind to experience weekly live band concerts.

37) Peppermill partners with the Clean the World program and recycles soaps and bottled amenities from guest rooms to distribute them to children and families around the world in an effort to stop the spread of preventable diseases.

38) The Peppermill’s Sportsbook alone holds 146 video screens. Two of those screens are the largest screens found anywhere in a Reno casino.

39) At any given time, The Peppermill features 1,537 slot machines on the Casino floor.

45) A second Peppermill Fireside Lounge can be found in Las Vegas, Nevada.